Marvel’s Merc with a Mouth stands ready for action in the Deadpool Premium Format Figure from Sideshow Collectibles. Unmistakable in his trademark red and black costume, fully sculpted, the glib master assassin is girded for combat with weapons for any occasion. A scaled-down assault rifle and automatic pistol are gripped in his fists. And should the fighting get close and personal, twin katanas are ready at his back. A deadly dagger rests in a leather sheath at one hip, and who knows what surprises are contained in those leather pouches on his belt? Standing at 20 inches in overall height on a base ringed with bullets, the Deadpool Premium Format Figure will make a lasting impression on any collection.

The history of Wade Wilson, the man who would become Deadpool, is as mercurial as the man himself. He’s a hyperviolent contract killer with a flair for the bizarre. Overloaded with weapons both edged and ranged as well as a healing factor that makes him practically unkillable, he’s an unstoppable opponent with a chronic case of schizophrenia. He’s turned his mental illness into a (frequently hilarious) asset, as his subsequent instability translates to a maddening unpredictability.

Initial interactions with Deadpool are frequently met with guarded skepticism, as no one can tell if his presence is that of an asset or an enemy … or merely that of an irritant. Deadpool dances back and forth across the rules of law with maniacal whimsy. He’s been both friend and foe to such heroes as Spider-man, Cable, The Punisher, Wolverine and the X-Men.

Deadpool’s twisted conscience is alternately fed and deprived by his schizophrenic nature. Just like all mercenaries, his motivations seem to be entirely financial. As such, he’ll perform jobs for both heroes and villains for a price. However, he has frequently left uncashed the checks paid to him by the X-man, Archangel.

Whoever Deadpool is, whatever his motivations, he’s a dangerous killing machine with the capriciousness of a psychopath. His abilities with weapons are on a par with such masters as Bullseye and Elektra. He’s more than a force to be reckoned with. 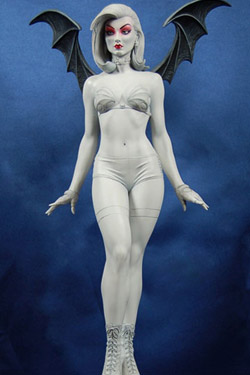 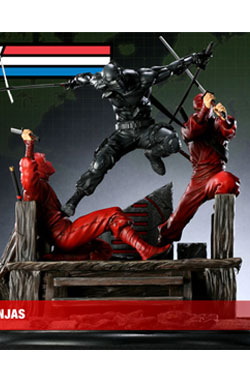 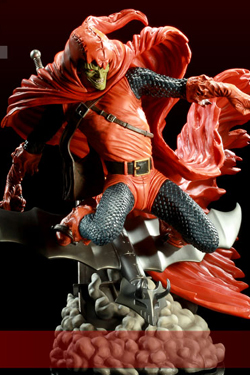 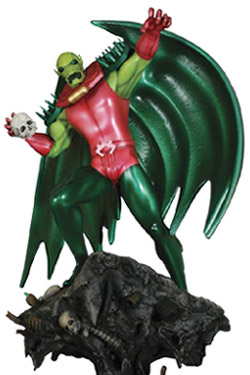 Sideshow Collectibles proudly unveils the next entry in our acclaimed Star Wars Mythos series, the best bounty hunter in the galaxy, Boba Fett. Armed for anything, Boba Fett carries the traditional blaster rifle along with some heavier firepower. The Boba Fett Mythos statue makes an outstanding addition to the growing Star Wars Mythos collection, another one of a kind look at a familiar Star Wars icon.

Boba Fett Bounty 239Bounty #239 is a paranoid scum. No surprise there. After making enemies in over a dozen systems making deals, breaking them, selling tainted product, even letting some so-called friends take the rap for one of his own schemes on Corellia that Bith slimo deserves everything that’s coming to him.

The embodiment of all evil in Middle-earth, the Dark Lord Sauron strides into battle in his hideous black armor, a towering pillar of malice in man-form, wielding his wicked mace. Wrought by fell means and infused with spells of devastation, the Dark Lord is impervious to all harm while the power of the One Ring is his.

Long ago, the Dark Lord Sauron ensnared nine kings of Men with the gift of Rings. Magical rings these were – Rings of Power- seemingly granting their wearers great foresight and abilities beyond those of mortal Men. But in secret the Dark Lord had crafted a single Ruling Ring, the One Ring, which he kept for himself. Imbued with his own spirit, the One Ring was a tool of domination, and, upon his placing it upon his finger, all who wore the lesser Rings became his slaves. 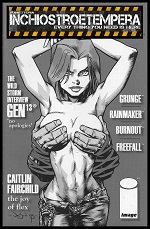